So, as the whole world is basically in lockdown, because of the corona virus. And you have probably completed the umpteenth course on Udemy. Mostly what I have been up to. But you are looking to maybe broaden your knowledge around what is happening in a specific technology. Currently, I am trying to expand my knowledge in web services, more specifically Apps, frontend & backend.

The main reason why I attend conferences is to network, and learn about new technologies, methods, etc. I think with some conferences which have taken to adopting a free tier, is a good move. As, they promote the conference and help grow the interest around the specific technology. 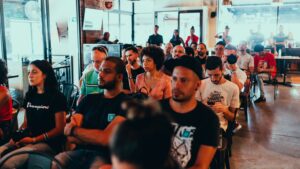 Through my search of conferences what I found, some offer a free or limited amount of sessions, I tried looking more for the generalist conferences with some niche programming languages. As, well I have noticed that most conferences upload the previous years presentations, which could make it worth your while to check out. Here are the 5 free summer dev conferences:

Is one of the oldest hacker conventions, out of the states. Mainly interested, in the talk on facial recognition algorithms used in protests.

They normally have a few of these a year. But if you haven’t worked in the AWS  environment, this is great way to start.

Is a developer conference which is based in San Francisco, the conference covers a wide variety of different techonologies, everything from devops to languages. You are certain to find something that interesets you.

I would say this is a definite must, as it normally costs $150 but because of the Corona virus they have made the event free.

This year the Apple’s WWDC will only be digital. However, it seems that  the conference is only free to developers meaning, you have to fork out $99 membership. Download the Apple Developer app.

About all things Graphql. Content  will be about 3-4 hours of talks and panels each day from experts in the GraphQL community.

These are the conferences that i am  considering to attend.Are there any conferences which you are interested in attending.

Let me know in the comments down below!